Redmond’s Funnest Party Bus Rental Service Fun Way To Go Party Bus /Redmond Party Limo is known to be the amusing party bus in the RedMond area; Your quest for Party bus in Redmond ends with Top Redmond Party bus service offered by us in a fascinated manner ;providing the greater Puget Sound area with 16 to 34 passenger party buses. Starting with a single 16 passenger within a year due to repeat and referrals, added a second 16 passenger 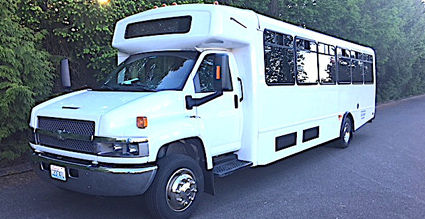 One of our smaller Redmond Party bus vehicles, we have a wide-ranging fleet to accommodate groups of all sizes

You won’t want to miss out on booking this gorgeous 26 passenger party bus! This party bus has wrap-around leather seats, sleek wood floors, color-changing lights, a TV, a DVD player, and a sound system you’ll love.